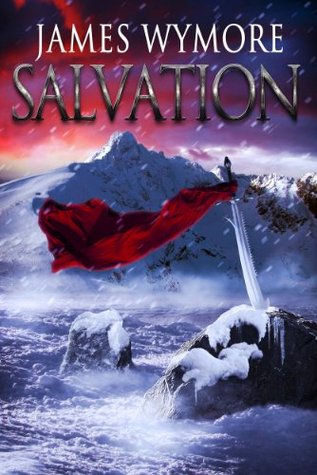 Now about this book, I liked it, I really did or at least most of it.  Let me give a little synopsis about the book before I start talking about it.

The book starts out with a married couple scavenging for metal on a frozen battlefield, when they come across a soldier that is still alive.  They take him home and nurse him back to health.  Once the soldier comes around he realizes he can't remember anything, so he stays with the couple and helps them with their little farm.  One day they decide to go and visit the woman's family in the mountains, while staying with her family he looks down to the ocean and see's the creatures that had attacked him the first time preparing for another attack.  Now he must take it upon himself to raise an army and protect these people who saved his life.

My only real problem was with the romance story line, if felt really rushed.  When he comes to the village he meets the sister of the woman who saved his life, and it's love at first sight.  I can dig love at first sight, but it was two days later and he was purposing to her!  Then it was another 2 or 3 days and she was telling him she was pregnant, she said she used magic to be able to tell, ok I'll buy that, but coupled with everything else it just made that portion of the story unbelievable.

The love story aside I thought it was really well done, the world building was good and the characters were endearing.  Although it lacked a little in the way of descriptiveness for the characters appearances, I don't know if the Hero was ever really fleshed out so that I had a clear picture of what he looked like.  Maybe the author did it on purpose, to let us readers form our own image.

I really enjoyed the fish creatures that were attacking the humans, I thought it was a really good idea for the "bad guys".  They are, at least to my knowledge, completely original.  And I really liked the idea of creatures that terrorizes the very source of life for humans.

On a whole I enjoyed the book and would recommend it to any fantasy reader as long as they didn't expect too much from the romance story line.